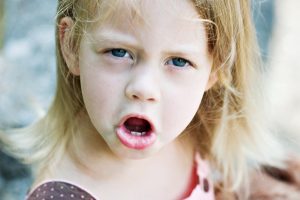 How to Deal with Annoying Toddler Behavior
Any parent will tell you that there are some toddler behaviors that will simply annoy you. In fact, the American Academy of Pediatrics says it’s your toddler’s job to test your limits. There are many ways in which they’ll do this and many things you can do when this happens.

Picking Their Nose
Although socially unacceptable, nose-picking is both normal and natural. This is a message that will take some time for your toddler to learn. Instead of dwelling on it, simply redirect your child or offer them a tissue.

Throwing Full-Body Tantrums
Impulse control is a skill that your child won’t develop until they’re four or 5-years-old. Unfortunately, this skill is necessary for them to refrain from having a tantrum. During this time, you as a parent must be patient. While you may be tempted to also have a tantrum, you should instead try to be sympathetic. You shouldn’t ever give in to your child’s tantrum though, because then you’re only teaching them that this is an effective way to get what they want.

Biting
Your child will enter an experimental phase when they’re between 9 – 18-months-old. During this time, they want to learn “What happens when I do this?” However, if your child continues biting after this age, you must address the issue. Start by checking to see if your toddler is hungry, tired, or teething. When your child bites another child, you should immediately apologize to the other parent so they know that you care and you’re working to correct this behavior issue.

Whining
Almost every child goes through a whiny phase. You don’t want to give in when this happens. Doing so gives your child a great tool to use in manipulating you. Instead, tell your child that you can’t understand them when they whine.

Being Impatient
Your child’s attention span is something that grows with them. You can help your child grow theirs by acknowledging that they have something important to say and asking them to wait until you are finished with what you’re doing before saying it. Never immediately drop what you’re doing to listen to your child because then they’ll believe that the world revolves around them, which will lead to even bigger problems in the future.

If you live in Mansfield, Texas and find that you’re nearing your wit’s end dealing with your toddler’s behavior, you should know that there’s some help available. The Children’s Academy has successfully helped many parents deal with their toddler’s behavior and we look forward to helping you too.