Memory Games to Build Concentration and Persistence in Children 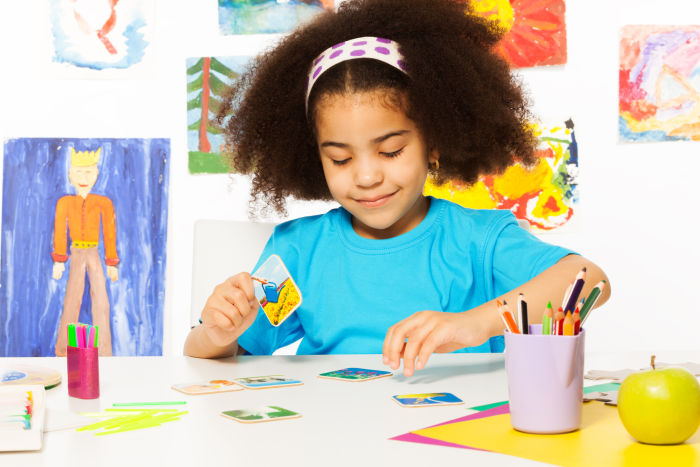 When it comes to concentration, children are wired differently than adults. Curiosity comes more naturally and all the possibilities for discovery can have kids jumping from one activity to another and having difficulty fully completing tasks. Kids also learn more by playing than (most) adults and less by formal instruction. Therefore, it’s important that children are exposed to experiential activities incorporated with valuable critical thinking and concentration skills, so that learning activities are also fun for your child.

Here are some simple ways to encourage focus and persistence with your child through memory games.

Although technology holds a well-deserved place in education and child development, it should be used sparingly. On the other hand, traditional toys and games provide a true hands-on approach.

For instance, wooden alphabet blocks are just as effective for teaching reading and language skills as an app with a similar function. However, your child not only gets to engage with this activity, but also learns the necessary organizational skills to set it up and put it away.

Although you can buy memory card sets for a Concentration game anywhere children’s toys are sold, you can make the activity more fun and meaningful to your child if you allow them to help you make your own set. You can take the opportunity to repurpose clutter in your home by cutting from newspapers and magazines to match items (such as 2 different pictures of an apple or 2 red square cutouts).

This game is also known as Memory or Pairs and is not only fun to play, it’s also fun to design.

Similar to Concentration, playing picture bingo involves matching pairs of images. To play the game, each player will need a baseboard. Players take turns picking a card from an assortment of cards that are face down on the table. If the player makes a match, he or she gets another turn. If not, the card is placed face down again and play passes to the left.

This is a memory game that gets increasingly more difficult as play progresses. One player starts by saying, “I went shopping and I bought (1 item).’ The next player says the same phrase with the first player’s item plus one more, and so on.

Although you don’t want your child to be attracted to street scams, an innocent game of magic cups at home can stir your child’s curiosity and put their memory skills to work. To begin, place 3 plastic cups in a line on a table, top down and with 2 identical pom-pom balls under 2 cups and a different colored ball under the third cup.

Depending on your child’s age and development, move the cups around at the appropriate speed to challenge your child but not frustrate them. When you’re done switching, ask your child to tell you which cup the ‘oddball’ was under.

The Children’s Academy of Mansfield, Texas would love to be a part of your child’s learning and development. Contact us for more information about their critical thinking and concentration skills.

Five Signs of an Over-Scheduled Child

The Importance of Reading Aloud to Children