How is Montessori Early Education Different? 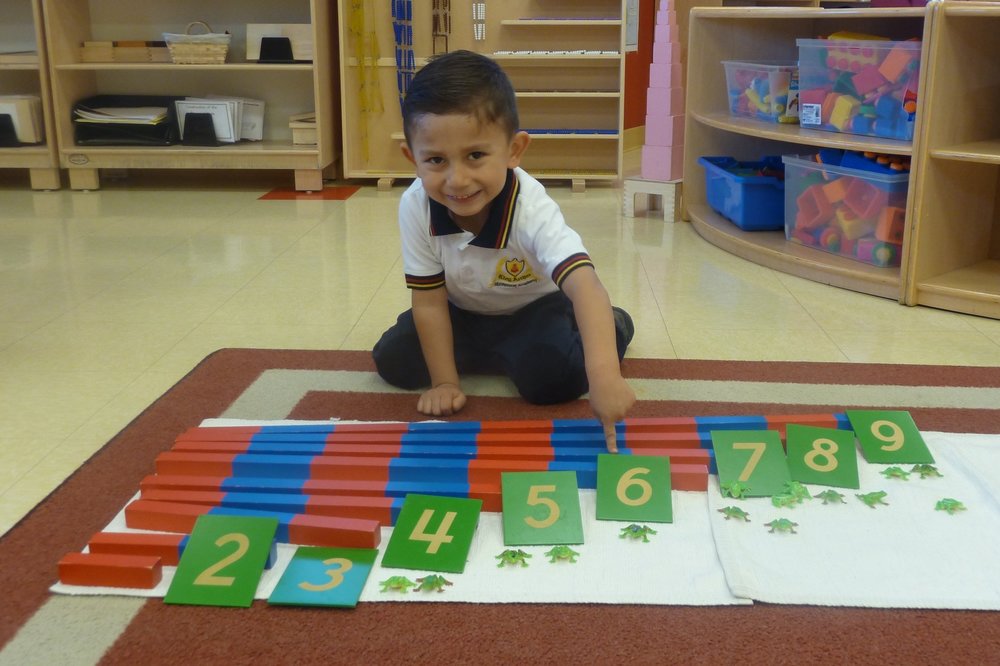 Montessori schools utilized four different principles.  The first principle is respect for the child.  Sensitive periods of learning are the second principle, followed by the third principle: independence and discovery.  The final and fourth principle is a prepared environment.  These four principles create an environment that is safe for the child to learn and grow in ways that feel comfortable to him or her.  It creates an environment in which the child can have freedom in exploration and discovery, allowing him or her to learn in a less rigid way.  The environment is created with the appropriate learning tools and lessons, so the child can learn in a developmentally appropriate way while also developing a sense of self.

Differences between Montessori and Traditional School

There are many key differences between a Montessori School and a traditional preschool.  The differences range from the type of learning to the methods of interaction and opportunity.  Montessori schools have a flexible curriculum, which gives the child choices related to education.  Traditional schools follow a more rigid curriculum without much choice.

Another difference is the child-to-teacher ratio.  There are approximately 25 children for each teacher in traditional preschools, whereas a Montessori school typically has a much smaller child-teacher ratio.  The classrooms in a Montessori preschool are multi-age.  This means that there are different age children in each classroom, allowing them to learn communication skills and ways of socializing.  This also gives the children opportunities to learn from one another.

A traditional preschool has instruction held at the teacher’s pace, where a Montessori school allows the children to learn at their own pace.  The teaching methods at the two types of schools vary as well.  In a Montessori school, the children can self-correct and learn for themselves, where traditional schools tend to use rewards or punishment as a way of motivation.

A Montessori school utilizes science-based research and emphasizes cognitive development and social and physical development.  If you are interested in learning more about the Montessori method, please call us here at Country Club Montessori, 817-473-8585, located in Mansfield, Texas.

How a Montessori School is Different

How to Deal with Annoying Toddler Behavior

What is Montessori’s Approach to Early Childhood Education?

The spread of COVID-19 is being monitored by The Children’s Academy (TCA). We continue to be diligent with our sanitation and safety protocols. We have an Ultraviolet Sanitation System and have daily sanitation with the Ashburn Chemical Technology system — not only will this help with COVID-19, but it will also help with colds, flu, strep throat, and any other airborne bacteria viruses.
Even though the Governor has opened the State and removed the mask mandate, Texas Childcare Licensing and Tarrant County Health Department have not relaxed their protocols. Until that happens TCA will continue with our current cleaning and safety precautions.

For the safety and wellbeing of the children, there will be no visitors in the school—including people contracted to make repairs, employee interviews, and prospective and currently enrolled parents—during operating hours. The first time you drop-off/pick up your child, and each week, an affidavit stating you have not knowingly been in contact with someone who has COVID-19 will need to be signed.

Our safety procedures will continue—taking temperatures at the door, children’s hands sanitized before they enter, and temperatures taken throughout the day. All teachers and staff are required to continue to wear a mask while at our school. Our outside schedules continue to be staggered, and we are making sure we follow the guidance of the CDC and Tarrant County Health Department.

TCA is over 30 years old, and we have never had a more family-oriented group of teachers and parents. Our continued diligence in precautions is to maintain the bubble that all of us have created around our families, children, and team members. You can help us maintain this bubble by doing the following:

Keep your child home and call your doctor if they are running a fever.
Avoid any unnecessary domestic or international travel.
Avoid groups of more than 50 people.
Do not frequent businesses unless they require masks and insist on social distancing.
Avoid high-risk businesses or activities such as concerts, bars, or festivals.

Thank you for continuing to help us maintain a safe, healthy, and happy environment for the children and staff at The Children’s Academy. We couldn’t do it without you!